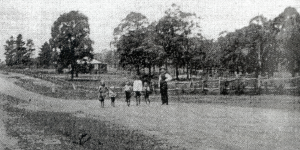 Alfred Ernest Morrison was born in 1915 at his grandmother's property, Beaconsfield in Tower Street East Hills, which was still a dirt track at the time and it is said that some of the floors in the family home may also have been dirt.

This area was first granted to George Johnston Junior in 1804 by Governor King. It was subsequently divided into a multitude of poultry farms, orchards and market gardens. By the early years of the twentieth century there were a couple of general stores, established tradesmen’s premises and even a School of Arts. Not far from Beaconsfield in Tower Street was John Schwarzel’s orchard and market garden and his wife Sarah was the local midwife who assisted in bringing Alfie into the world. 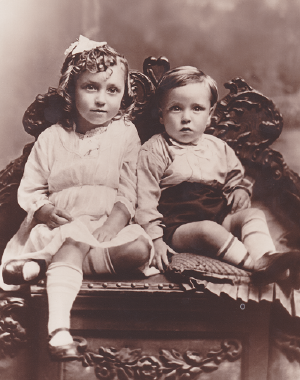 The family shortly after moved to Restwell Street Bankstown where Alf lived with his parents Ernie and Carrie, his older sister Lydia and his still older half-brother Lewis "Fatty" Ramsden from Carrie's previous marriage.

Ernie set up business as fuel and produce merchants near Bankstown station but after a number of different partners he finally left the business in 1923. Family stories suggest that he was not a good businessman being too free with credit for his own good. The failure of the business appears to have put strain on his marriage and within a few years he had left Bankstown for good espousing how he hated the place and would never return. 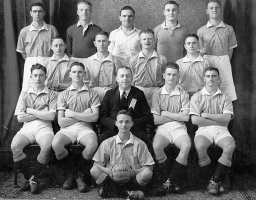 Alf left school after sixth class at Bankstown Public School, also in Restwell Street. He worked for a time on a poultry farm in Georges Hall where he gained a lifetime aversion to chicken even though it was still considered more of a luxury at that time.

Alf was always a healthy specimen and developed into a fine athlete. At nearly six feet he had a strong slender frame and succeeded at most sports to which he turned his hand. He was a fine sprinter and played both rugby league and soccer, representing New South Wales in the Protestant Churches competition. He always looked up to his brother Lewis, commonly known by the misnomer “Fatty”, who was an even better sportsman and extremely popular in the area.

He was one of the early Sappers joining the 2/12th at Liverpool camp. The unit did their basic infantry and some field engineering training at Ingleburn camp then moved to the Bathurst camp near Kelso on Limekilns Road where they spent several months. The 8th Division had moved to the Bathurst camp after the 7th Division moved out and embarked overseas. The C.O. was Major John Adrian McComb, “the Mad Major”. Captain John A. L. Shaw was later promoted to Major and took over commanding 2/12 Fld. Coy. R.A.E. and Captain Len E. Bourne became 2IC. They then moved to the Coast Defence Command at Cape Banks, North Head with No. 2 Section under Lt. Archie Campbell. Here they worked on building fortifications at the artillery camp.

Final leave was given in late June 1941 they then returned to Bathurst before embarking in Sydney on 29 July 1941 on the Dutch ship “Johann van Olden-Barneveldt” which arrived in Singapore on 23 August 1941. 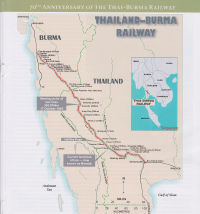 After a brief stay at the general base Depot at Tampoi near Johore Bahru he spent the training period at Kluang (Johore).  Fighting ceased and Singapore fell on 15 February 1942 and  Alf was listed as “missing” on 9 April 1942.

Shortly afterwards with work having begun on the Thailand-Burma Railway, “A” Force under CO Major J.A.L. Shaw was formed and left Changi in May 1942. This was followed by other Forces including “D” Force in March 1943 and “F” Force which left Selarang Barracks for Siam on 18 April 1943 comprising 3,600 British and 3,400 Australians. Alf was part of "F" Force.

The 263 mile Burma-Siam railway from Thanbyuzayat to Ban Pong was built by British, Australian, Dutch and American prisoners of war. Parties working from both ends met at Nieke in November 1943 and the line was completed in December.

The hardships experienced by prisoners of the “railway” have been well chronicled. Alf’s medical record indicates that during the war years he suffered malaria, dysentery, dengue, tropical ulcers, septic scabies and other minor problems. He returned to Changi until mid December 1944.

During Alf's time in captivity, Carrie endeavoured to find out what she could about her son and here are some examples of the informationn that was possible. 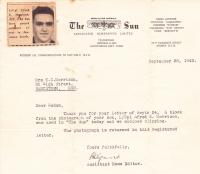 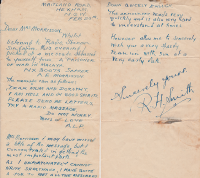 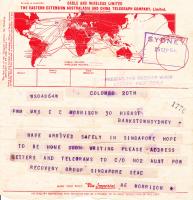 When the war ended on 15 August 1945, it was not long before arrangements were made for the POWs to be brought home. Alf was part of the contingent that embarked in Singapore of the “Largs Bay” on 21 September 1945 arriving in Sydney on 10 October. A welcome home picnci was arranged for returning POWs at Ingleburn a couple of weeks later and it was recorded in the newspapers. 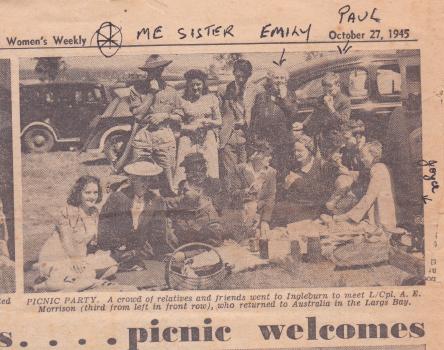 Alf was formally discharged from the service on 8 February 1946.

Within six months Alf married local Bankstown girl Norma Beryl Bray starting a long married life together of 49 Years and raising their family before Alf passed away at the age of 79 years.

One of the highlights of Alf and Norma's later life was their visit Singapore and Thailand to lay to rest some old memories. 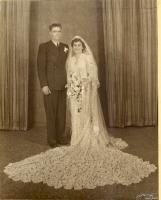 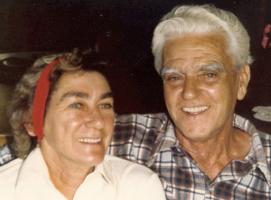 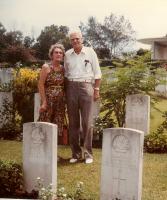 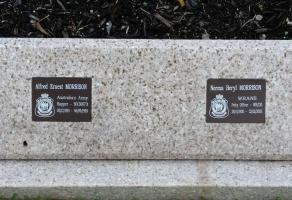