William Ernest Morrison migrated to Australia about 1910. He was the second of five children to John and Margaret (nee Christian) Morrison. He was born at Ballaquaggan, Malew, Isle of Man on 28 June 1884 and baptised at Santon (St. Sanctain) on 26 October 1884. In the 1901 census his occupation was given as a gardener living at Kentraugh in the parish of Rushen.

He had enlisted in the Royal Marine Light Infantry, Portsmouth Division, in September 1901 only a couple of months after his seventeenth birthday. The records showed that he served seven years on a number of ships. Firstly, there was the HMS Majestic, a battleship stationed mainly in the Mediterranean Sea, next was the sister ship HMS Caesar which was the flagship of the Channel Fleet, and lastly the cruiser HMS Powerful. The most exciting news was that Powerful became the flagship of the Australia Station (prior to the formation of the Royal Australian Navy in 1911), stationed in Sydney. 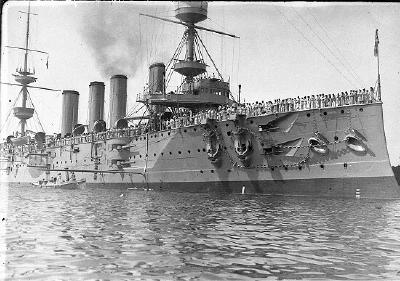 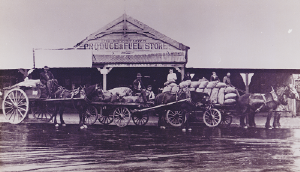 He migrated to Australia about 1910, and in Auguet 1912 he married Elizabeth Caroline Marion Thomasina Ramsden (nee Briscoe) with his occupation was given as farmer. The family lived at "Beaconsfield" in Tower Street East Hills on his mother-in-law, Elizabeth Briscoe's property. Following Elizabeth's death, the property was sold in June 1918 and the family moved to Bankstown.

They lived at "The Ranch" in Restwell Street Bankstown and Ernie went into business as fuel and produce merchant with various partners further up the street near South Terrace wand had a succession of partners over several years, and there are a number of photographs of him and his delivery wagon. The business wasn’t to last more than a few years however and it has been suggested that Ernie was not a hard enough businessman, but somewhat of a “soft touch” in those difficult post-WW1 times, incurring too many bad debts to sustain the business. Whether this was a contributing factor is not known, but within a few years his marriage had failed and he had left Bankstown.

In about 1927 after his business failed Ernie left Bankstown, and Caroline struggled in raise her two teenage children, with the help of the extended (Briscoe) family.

Ernie worked as a grill cook at Central Railway Station until he retired because of a heart condition in 1946. At the time of his death at Yarra Bay on 20 July 1951, he lived at Riley Street, Sydney.  He was cremated at the Eastern Suburbs Crematorium on 23 July 1951. 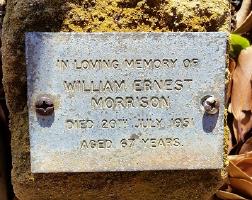